Our second installment on Glacial Hills turns from the history of the trails to the future! From new forms of recreation to updated wayfinding, there is still so much more to come from this great natural space. If you missed Part One, check it out here.

As the Glacial Hills Pathway and Natural Area grows in popularity, those involved with running and supporting it are doing their best to ensure an excellent user experience.

Among the most exciting new features will be a completely revamped signage and wayfinding system to helps users get the most out of the more than 30 miles of trail that wind through the woods and fields in this beautiful natural area.

Over the years, folks at Friends of Glacial Hills (the joint recreation authority that runs the natural area) heard various complaints from people who either got lost or were afraid of that possibility. Dozens and dozens of trail intersections meant that someone who wasn’t carefully paying attention to signage might get turned around and hike or bike.

“Some people found the trails confusing, especially at intersections,” said Tim Reicha, chair of Friends of Glacial Hills. “Nobody wants to get lost in the woods.”

The new system formally names trail loops and gives each one a color and an icon, allowing users to make better sense of all those squiggly lines on the map. In addition, it will include clear signage with maps at each intersection, along with smaller icon signs that allow users to quickly determine what direction they need to go to follow their loop of choice.

“Cyclists won’t even have to slow down, which is nice,” Reicha said.

Because Glacial Hills is a very big place with many miles of trail, the new system was also designed to give users a better sense of how to tackle the sprawling system by time or desired distance.

“With this new wayfinding, we were very conscious of distance. We have varying distances across the board, but we also have suggested connected routes so you can plan your ride by distance,” Reicha said. “This helps folks plan better and allows us to highlight great sections of the trail.”

Some elements are already in place, and the new signage system should be fully implemented this year. Installation work is currently on hold due to the COVID-19 pandemic.

Also expected to be completed soon is a new 5-6 mile loop designed specifically for novices. The loop will mostly comprise existing trail with a few new connectors, giving people who want something a little easier a great new choice.

“We get a lot of questions about where to go for the least amount of hills, and right now there’s not a good answer outside of a little ¾ mile loop,” Reicha said. “So if you want to bring your six year old out who’s just getting into riding, or something along those lines, you’ll have a better option.”

Glacial Hills also hopes to continue and strengthen its relationship with local businesses, many of which periodically host fundraisers for the natural area. Glacial Hills’ impact on the local economy was clearly shown in a recent economic impact study (link).

“I think the local businesses understand that Glacial Hills is good for them, and it’s become a symbiotic relationship,” volunteer Bob Holtzmann said. “To me, it’s very exciting to see a vibrant downtown, especially when there are a lot of dead downtowns, and Glacial Hills is definitely part of that success.”

Volunteer Jim Fisher, who heads the volunteer trail maintenance group that keeps the trails in such good shape, is excited about continued use of a web-based system developed with the Grand Traverse Regional Land Conservancy (link), the organization that protected the land that made Glacial Hills possible.

When Fisher first started out with trail maintenance, volunteer groups would pick a section of the trail to patrol more or less at random. The new system keeps track of what sections have been patrolled and when, and also allows volunteers to drop pins (with pictures) to record issues and whether or not they’ve been fixed. This system has drastically improved efficiency, with volunteers easily able to see what areas or issues need attention.

“There’s quite a few volunteers that wake up in the morning, get their cup of coffee, pull up the map and see there’s a tree down or something like that, and go out and fix it. Then they can record it as fixed,” Fisher said. “It’s a great system and an efficient system.”

These volunteers are the lifeblood of Glacial Hills, Reicha said.

One Month To The Short's Glacial Hills Challenge

Spring Is Around The Corner At Glacial Hills

Glacial Hills Goods For All Your Holiday Shopping!

Rolling Into September At Glacial Hills

The Get To Glacial Hills Challenge Starts August 1!

No Race? No Reason Not To Ride! 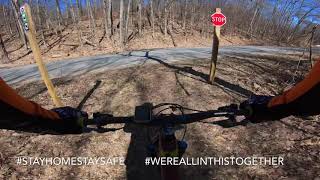